The count is neither sad nor sick nor cheerful nor well—

he’s just civil, as Seville as an orange,

with the same jealous-yellow complexion.

-Shakespeare, Much Ado about Nothing

Our marmalade can be made with fresh citrus, saved peels (from fruit that has already been juiced or eaten), or from your peels after they’ve been soaked to infuse alcohol, such as in our Tale of Two Vins post.  Marmalade is a great addition to our Feasting in Times of Winter Scarcity series, using up every last bit of your citrus.  As we’ve mentioned in previous posts, we are attempting to place ourselves in the mindset of a time when citrus would have been such a special commodity that we would have tried to hold on to every last bit of its flavor for as long as possible, seeing the peel as a valuable resource rather than a waste product.  Marmalade not only makes use of the peel, but showcases it. 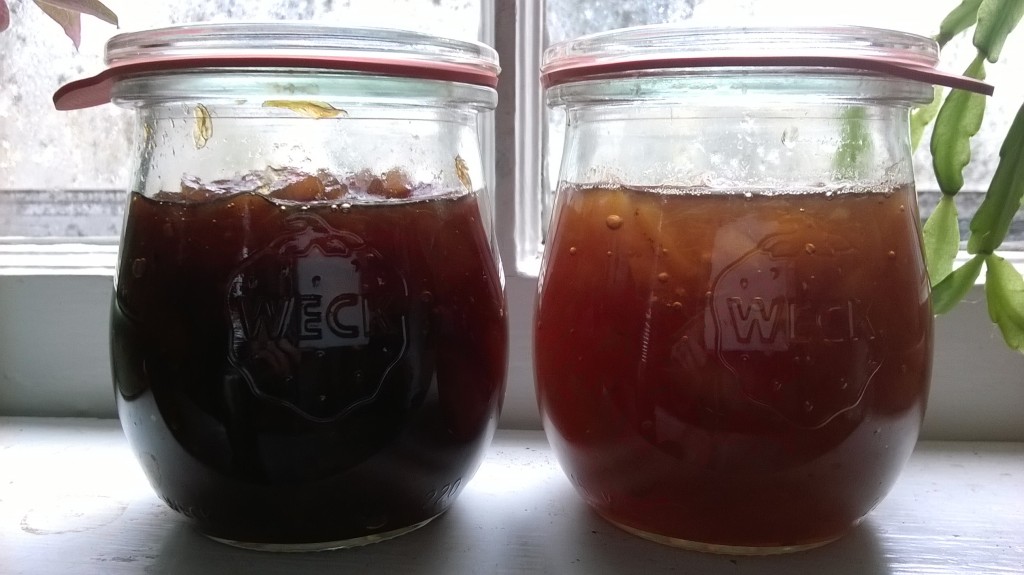 Many of us probably associated marmalade with the British – as something you have on your crumpets with your tea.  Enough British stereotypes yet?  Throw in a “Cheerio!” for good measure.

Today we think of marmalade as referring exclusively to citrus jam – a sweet, tart, and slightly bitter combination of jellied citrus juice and tender peel.  The word marmalade comes from the Portuguese word marmelada, for quince jam.  Yet Seville oranges came to be known as the quintessential marmalade fruit. 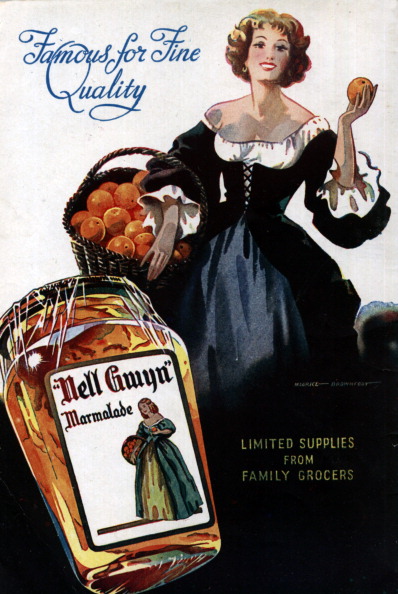 American canning books will often differentiate between “quick” and “traditional” marmalade.  Quick marmalade has added pectin.  However, I prefer the long method, as the citrus peel is chock-full of pectin, making added pectin unnecessary if you are willing to take a little more time.  This utilizes an existing resource while saving you a little money and using fewer processed additives.

The peels.  As mentioned above, you can use fresh citrus, with all of the pulp and juice intact.  However we are using peels from citrus that has already had the flesh eaten or juiced (and then possibly soaked in alcohol).  If using juiced citrus, I leave the remaining pulp attached.  You can make a one-fruit marmalade out of any one citrus peel type, or mix and match.  Note that the classic Seville oranges are higher in pectin than much of the citrus we commonly use, and that freezing the peels can reduce pectin content.  This may mean you’ll need to cook your marmalade down further to get the consistency you are looking for without adding pectin. 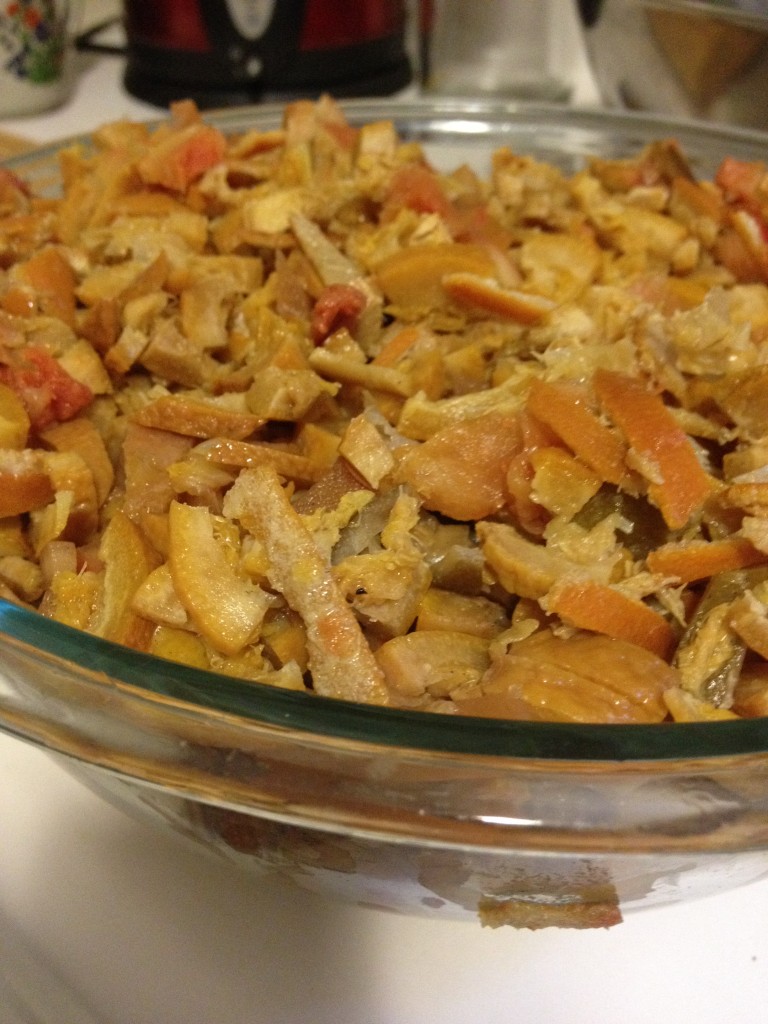 The pips.  Many people recommend saving the pips, or seeds, from the fruit to soak or boil in a muslin bag to release further pectin.  However, many sources say that most of the pectin is really in the peels and pith, and the seeds don’t much matter.  I find with our more common citrus fruits, there are too few seeds to bother with, contrary to Seville oranges which are full of seeds.

The liquid.  For the liquid that makes the gelled portion of your marmalade, you can use water or citrus juice.  Alternatively, you can use wine, leftover cocktail or punch (whatever that is), or a combination of these things.  Note the significant color difference in the two jars in the picture at the top – one made with wine and the other with water.

Additional flavors.  Classic marmalade often does not include any added flavors, but rather, lets the taste of the citrus shine.  I am a big fan of the classics, but if you have a lot of peels, some variation is nice too.  Add fall spices to a marmalade of orange and red wine.  Add lots of fresh ginger to a classic orange marmalade to spice it up.  Add rosemary and peppercorns to grapefruit marmalade to mimic the flavors in our Vin d’ Pamplemousse.  Throw in a 1/4 cup of bourbon right before canning.  This is where there is some room for experimentation.

Liquid, enough to cover peels by about 1 inch (water, juice, wine, or a combination)

Grease the bottom of a large heavy-bottomed saucepan (large enough that all contents do not come more than halfway up the side) with butter or oil.  This will help prevent scorching later.

Combine citrus fruit/peels and enough liquid to cover them in your large saucepan.  At this point, I like to cook the peels covered until they are soft (as long as 1-2 hours) and then let them sit in the liquid overnight to release more of the pectin.  But you can also just cook them covered until they are your desired softness, and then move on. 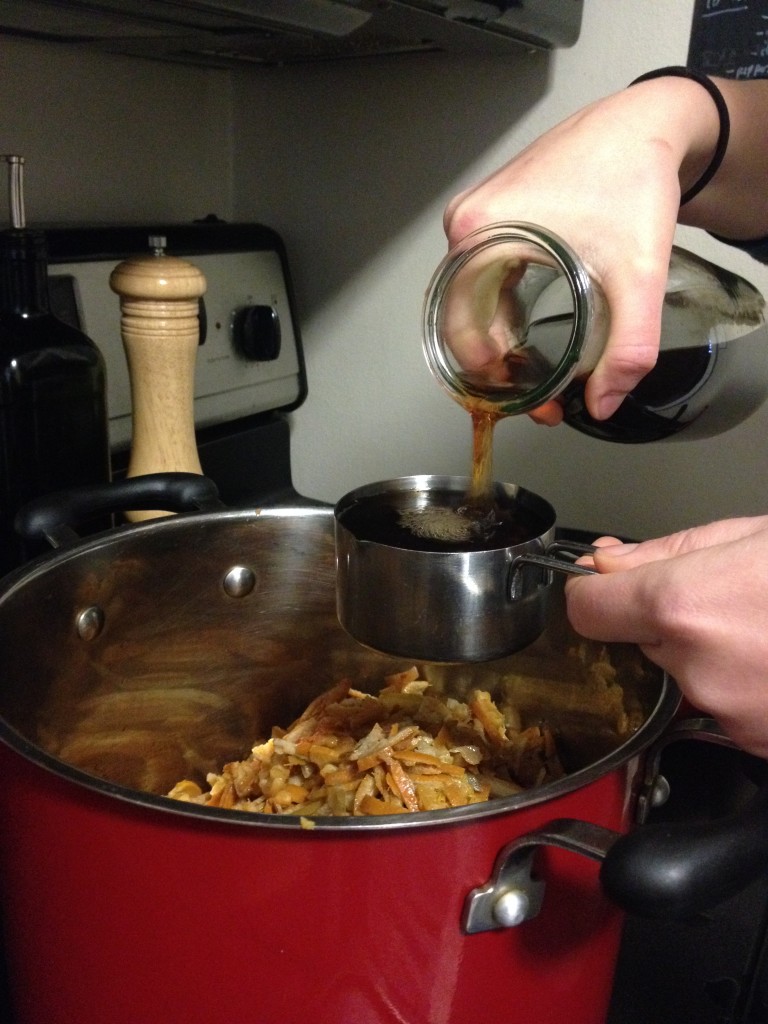 Note:  Test a peel’s softness by eating one.  If it is not to the softness you would desire it to be on your morning toast at this point, cook or allow to soak longer until it is.  The peels will NOT continue to soften once the sugar is added.

Optional: At this point, if you want to be extra sure of your ratio, you can strain the peels from the liquid and measure how much liquid you have.  You want to have an equal weight of liquid as you had peels when you started (so 1 1/4 lbs).  If you have less than this, add liquid; if you have more, cook the liquid down further. 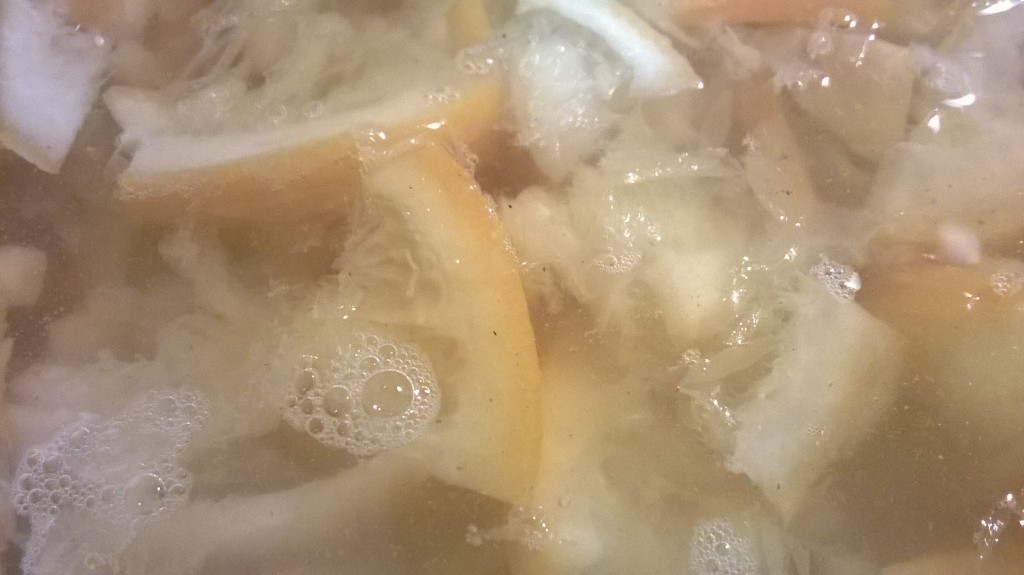 Add any spices you wish at this stage.  For whole spices that you want removed before eating, place in a tied-up bag of cheese cloth to be easily removed later.

Warm the mixture over medium-high heat. 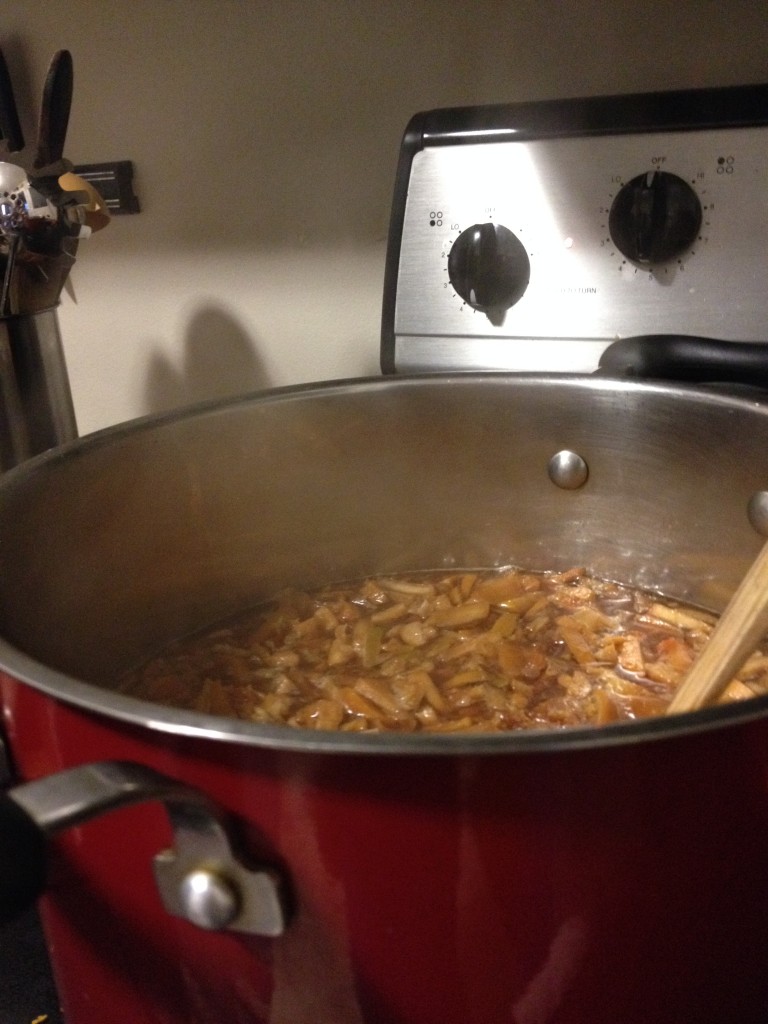 Stir in sugar and lemon juice before contents come to a boil.  The sugar will not dissolve as well if you add it to boiling liquid.

Bring mixture to a hard boil.   Sources disagree on whether you should stir or not during this stage, some saying not at all, others saying occasionally, still others saying constantly.  All have risks.  Stirring a pot of boiling marmalade sometimes seems it should require a welding mask due to the risk of popping, splattering hot sugar.  Yet, I have also had to chisel a scorched layer of jam off one too many pots to trust not stirring at all.  I’ll let you decide.

Begin testing the marmalade for thickness once it starts looking shiny and syrupy.  You need to chill a dollop to see what the consistency will look like once the marmalade has cooled.  I prefer to use the cold saucer “gel stage” test rather than looking for a specific temperature.  Furthermore, I like my marmalade to be about the consistency of thick syrup rather than “crinkle” when I do the saucer test.  I find taking the marmalade all the way to the “gel stage” is difficult with lower-pectin peels and puts you at a high risk of scorching.  It seems to still firm up nicely after cooling in the jars.

Allow to sit for 10 minutes once marmalade has reached the gel stage.  This allows it to thicken slightly, which means the peels will stay suspended in the liquid when you stir it, rather than all fall to the bottom.  This give you even peel suspension in your final jarred product.

You may notice foam on top.  You can either scoop any foam that has appeared on top off with a spoon, or simply stir it back in after the cooling period.  It’s just bubbles, so it won’t hurt anything.

Ladle the marmalade into clean jars, leaving 1/4-inch headspace at the top of the jar.  If you want to store jars in the refrigerator, you can just put lids on and allow to cool before refrigerating.  If you plan to can the jars for long-term storage, see our instructions on water bath canning, and process at a boil for 10 minutes.

Enjoy your marmalade for months to come on toast (or crumpets)… on or in sponge or pound cake…. added to marinades, barbecue or stir fry sauces…  or smothered over pork or chicken.  If you eat (and drink!) as much citrus as I do all winter, you’ll certainly have the peels to make enough to last till next winter!

Feasting in Times of Winter Scarcity

Reposting one of my all time favorite wild heart p